It has been a while since I wrote a recipe but the other day, I made these tasty little bites for my friend Carol when she came over for our monthly catch up. I visited Macroom Buffalo Cheese a week or so back to interview Johnny Lynch, Ireland’s only Buffalo Farmer, and his cheesemaker Sean Ferry and the result was that I walked away with a lot of goodies. Since trying the Macroom Buffalo Ricotta, I have to admit that I am a big fan. It has a firm texture and a wonderful subtle flavour and nothing compared to the stuff yo buy in supermarkets. I made already baked ricotta (you can watch a video of me making it here) and it was delicious, so was looking for new ways of using this wonderful cheese. So, here I was, looking for some new ideas when I remembered some goat cheese fritters I made a few years ago and as the ricotta is nice and dry, I thought it to be perfect for a new kind of fritter. The fritters were very tasty but slightly soft, so if you like to serve them as fingerfood, you will have to add a bit of flour to the mix. I have a jar of garlic confit in the cupboard (simply cook peeled garlic in olive oil and jar it) – I like roasted garlic more than raw one but it is entirely up to you. The fritters will need a dip. You can of course use sweet chili sauce but since it is being used in almost everything these days, I decided on a roasted pepper dip (also because I had a few in the fridge that needed using). As I had only yellow peppers, the dip turned a bit pale so you might want to use red peppers for a more dramatic colour. Next time I will add some more garlic to the dip but it was delicious as it was and went so well with the fritters. Carol was happy indeed. 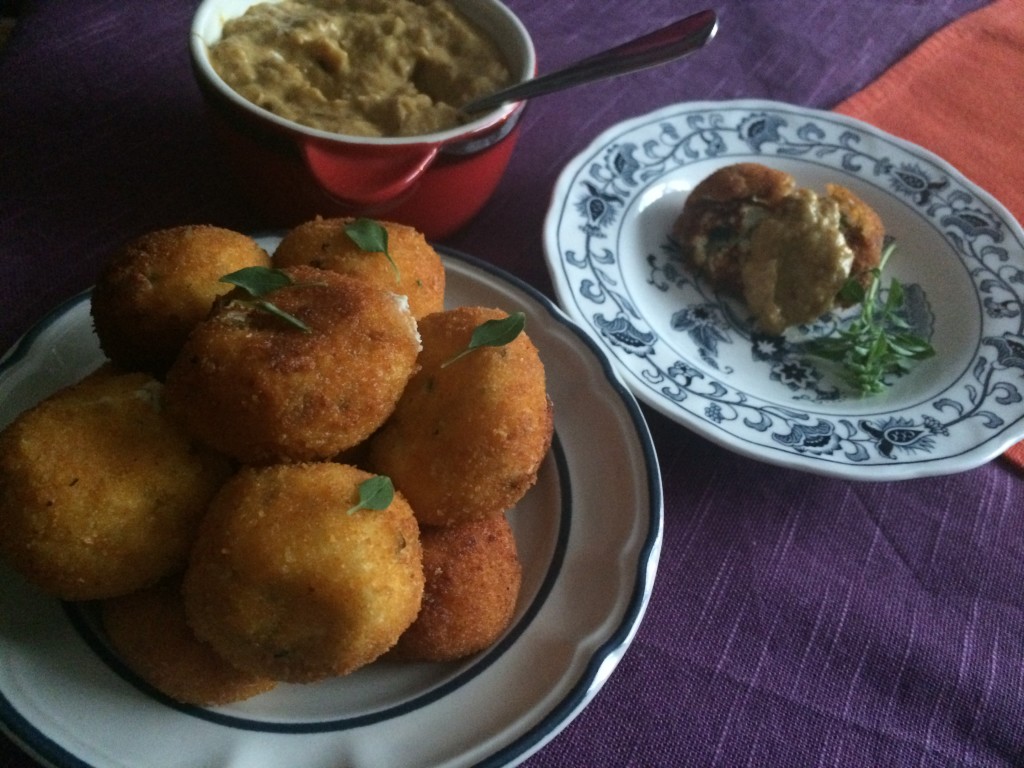 In a large bowl, mix the ricotta, parmesan, chives and egg yolk – stir to combine well. Season to taste with salt & pepper. With your hands, form the mix into walnut sized balls (you should get about 12-14). Chill for 30 minutes to set.

In a pan, heat enough oil to cover the balls and heat (drop a piece of bread in to check if it sizzles). Take two shallow bowls, in one whisk up the egg white slightly with a fork and pour the breadcrumbs into the second bowl. Dip each cheese ball into the egg white and then straight away into the breadcrumbs, making sure that everything is covered. Drop balls into the hot oil (being careful), making sure not to overcrowd the pan. Fry until golden brown (you might have to turn them if they are not covered in the oil). Remove from the pan and drain of excess fat on kitchen paper. Continue with the rest of the balls.

Cut the peppers in quarters and remove the seeds and membrane. Cut the quarters in half again. Mix the peppers with the garlic and onions (don’t chop the onions too small as they will burn otherwise). Place the vegetables on a baking/roasting tray and drizzle with the olive oil and balsamic vinegar. Sprinkle with a little salt. Toss so that everything is covered with the oil and vinegar. Place in the oven for anything between 30-40 minutes (turning everything once halfway through). The skin of the peppers should have turned a bit brown and blistery. Leave to cool.

Where the skin is blistered from the peppers, remove it. You can leave the rest on it. When cold enough, place everything (except the removed skin) in a food blender and process to the consistency of your liking (I like mine semi smooth). If you want a really smooth dip, press it through a sieve in a bowl. Season to your liking and serve with the fritters above