You are here:
Fingerfood 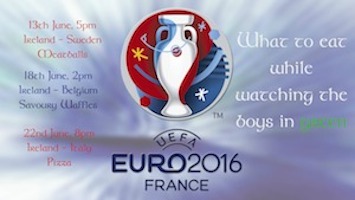 The Euro 2016 has arrived – France will be opening the competition with a game against Romania. Europe might come to a standstill while the teams are batting it out to take home the crown as best European team. Ireland will take to the pitch on Monday, 13th June at 5pm. You can of course sit in one of the many pubs, drink a few pints and watch the games on the big screen. Rising Sons Brewery has a large screen and offer some tasty craft beers while you are watching the match – other good places to watch the matches are Woolshed Baa & Grill, Soho, The Rob Roy and many more – too many to list here. 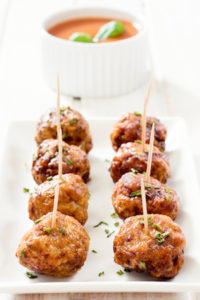 But if you don’t like to sit in a pub – why not ‘host’ a ‘Match Day’ for your footie friends? Here are some ideas for the upcoming matches:

Sweden is famous for its meatballs and if you have ever been to Ikea – the most sold dish in the restaurant is their meatball dish with mash potatoes, creamy sauce and lingonberry preserves. For a football match, you might like to avoid a ‘proper’ dinner but prefer fingerfood that your friends can just pop into their mouth. Why not make a whole platter of these tasty meatballs and a separate bowl with a dipping sauce (try to get your hands on some bottles of the TMT Ketchup – they have different ones like Smoked Ketchup, Spicy Ketchup and Artisan Ketchup; utterly delicious and available from Bradley’s). Making meatballs ain’t that difficult you might think but Ikea actually published a cookbook with the ‘original’ recipe. I am not going to pretend that I have re-invented the wheel – here is the link for the recipe by Christine Ho.

What do we know about Belgium Food other than their tasty waffles and rich chocolate? Yes, they are famous for their French Fries (actually called Pommes Frites) but let’s face it, chips (at the end of the day, that’s what they are – just a bit skinnier) are not really exciting while watching the boys in green. So, why not create a little twist to the good old waffle – let’s do a savoury version. Here is a wonderful recipe by Lisa Lavery from San Fransisco where she is enriching the batter with grated mature cheddar and she is even mentioning that she is using Irish cheddar. The only lowdown for making waffles, you will need a waffle iron. As I don’t have one myself (if I am in need of a good waffle, I head to Cafe Idaho in Caroline Street behind Brown Thomas where Mairead and 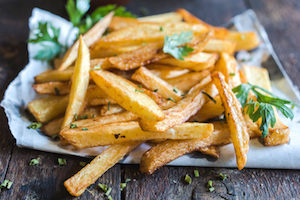 Richard Jacob are serving the best waffles in town). So, if you are like me and you don’t have the waffle gadget, we might have to revert back to Pommes Frites – what about Garlic & Cheese Chips? Replace the chunky chips with the elegant skinny ones (cooked), drizzle a nice garlic sauce over, sprinkle with cheese and pop quickly in the oven until the cheese is melted. It is just the most messy food but trust me, it is utterly tasty.

The easiest way of making this recipe is to use shop bought chips, excuse me – French Fries or Pommes Frites. If you get the oven baked ones, you can tell yourself that you have been a good boy or girl. Place a tub of cream cheese (minus the tub – just in case you follow instructions to the T) into a saucepan and place over low heat to melt slowly. Mince a few garlic cloves (and how many is totally up to you – how strong can you take it???) and grate some delicious mature cheddar (if you can get your hands on and can afford it, try to get some of the awesome Hegarty Cheddar). When the cream cheese starts to melt, add the garlic and stir in well. Keep stirring until the garlic has lost its ‘sharpness’ and the cream cheese has turned into a sauce. Place the cooked french fries in an ovenproof dish (preferably one that can double as a serving dish), drizzle the sauce over the french fries, sprinkle the grated cheese over the top and place under a hot grill just until the cheese has slightly melted (you don’t want to cook the chips and the sauce again). Serve with a cold pint of craft beer and enjoy the match. 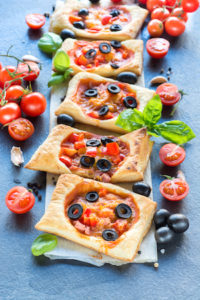 Yes, this isn’t the easiest of groups to be stuck with but at least Italy offers us a range of beautiful food – who doesn’t love a good pizza. To be honest, I have enjoyed quite a few nice pizzas from take away places (Blarney used to have an awesome one called De Barra – the best pizza around. I was so upset when they closed a few months back) but it is also very easy to make your own pizza. Cut into wedges, your footie friends will feel as if they are in the stadium with the boys in green. There are many recipes for pizza out there – I personally love the skinny base but have yet to master the craft of creating one. Mr T brought home a ready-made pizza base the other day from Aldi and have to admit, it was quite good. As I am preparing for a pizza cook-off with a friend of mine, I am not sharing my recipe here but Jamie Oliver has some easy to follow recipes that will give you great results. Just to let you know, Pizza Hawaii is NOT Italian – not sure who ever got the idea of pineapple and ham and now I let you in on a secret: Mr T loves Hawaiian pizza (and I still shudder).

Come on the boys in green – enjoy the games xx