50 Best Restaurants in the World 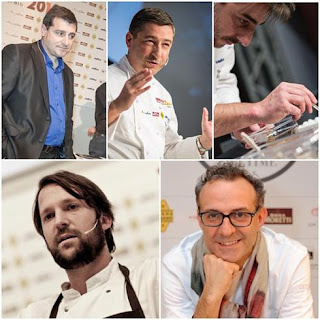 I spent last night watching the live streaming of the 50 World’s Best Restaurants Awards – and yes, I really have a life. So, first the bad news – Ireland hasn’t been listed (not even in the 100 Best) and Noma has been thrown from the throne and been replaced by the Roca Brothers of El Celler de Can Roca from Girona, Spain.

What does it mean to a restaurant to win this award – apart from being proud as Oscar?? It means money – the waiting list will fill up now within a few days for the next 2 years. All food critics will want to see what this is all about now and every foodie who takes him/herself serious will plan a trip to Girona. For all who can’t afford travelling – their new book is out soon.

Big celebrations were held in London where the awards took place – and I guess the 3 brothers got a lot of free drinks. It was great to see the joy these 3 men showed – normally only seen in men when the hometeam wins. Getting to the top of this list takes time, dedication and damn hard work. I would be naturally too lazy to put that much work and long hours in but when you are willing to do it, the rewards are great. Obviously, getting a Michelin Star is a great achievement but just imagine what it means to be THE best.

So, how do you become the best?? The Diners Club® World’s 50 Best Restaurants Academy is the body that votes on the restaurant. The globe is divided into regions and each region has a chair person who has to get a group of 36 experts together. Altogether around 900 expert make up the list of the 100 Best Restaurants in the World – a job I could really settle for. Richard Vines is the Chair for UK & Ireland (he must have missed the plane tho). Richard grew up in Oxford and his first job after leaving school was as a train announcer at the city’s railway station. He took evening classes in economics and went on to graduate in sociology from the London School of Economics. After gaining a postgraduate diploma in journalism studies at Cardiff University, he trained at the Morning Telegraph newspaper in Sheffield. Richard later joined the foreign desk of The Times in London, then in 1982 became an adviser to China Daily in Beijing. He subsequently spent 12 years in Hong Kong working as an editor on The Asian Wall Street Journal and as Foreign Editor on the South China Morning Post. He joined Bloomberg in London in 1995 and became Chief Food Critic in 2004 (bio taken from website). I think, I would prefer a chef as chair – we might send good old Richard a list of Irish Restaurants as well as out train timetable.

Anyway, here are the awards from last night

Congratulations to all winners.

Below are the number of restaurants that made the 100 Best by country. Considering the size of Spain and Italy, well done guys…..