You are here:
Travel Report 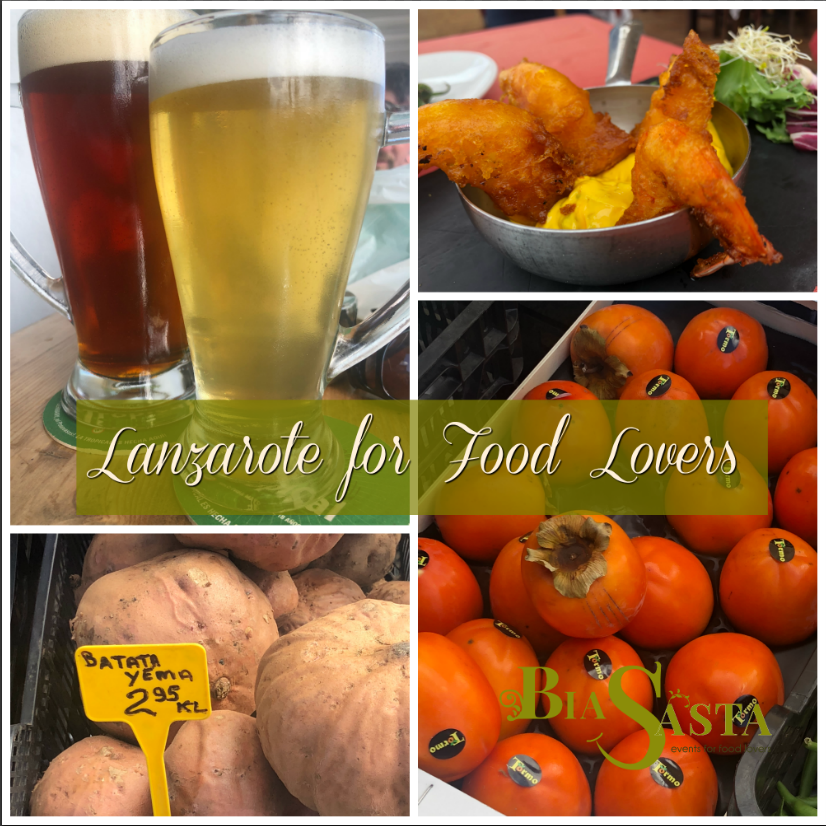 I can hear you – Lanzarote of all places! Yes, we were in urgent need of a break after a long and busy January and since a friend of ours owns an apartment in Puerto del Carmen, the decision was made quickly.

Lanzarote is not for people who are looking for the ‘real’ Spain. The main industry of the island is tourism (the other being agriculture, wine in particular) and it becomes obvious straight away as the businesses are trying hard to give the tourists what they want. And what they seem to want is food they know and drink – and it. You can get a carafe of Sangria at if the place is open. You recognise the people who come regularly and the who have never left.

Every restaurant has menus in Spanish, English, German and Scandinavian. And apart from a few exceptions, all menus cater for tourists with the full Irish breakfast and tapas include chicken wings. So not exactly what makes a food lover’s heart flutter.

But luckily there were a few highlights. In Puerto del Carmen, La Lonja is a traditional tapas and seafood restaurant, near the port with a fishmonger attached to it. The menu states that locally caught fish is used in all their dishes. As in traditional tapas bars, the tapas dishes are displayed at the bar and reheated if served hot. This can lead to soggy coating of croquettes and fritters but doesn’t affect the flavour. The place looks a mix of traditional Spanish eatery and an American diner with the metal bar, high ceilings and open doors.

The food was good – we had a selection of dishes: Fried fish in batter, served with lemon (this is where the soggy coating comes in but it was great fish), Padron peppers (one of my favourite snacks) was nice enough but I prefer them more roasted. Avocado with prawns was served with a Marie-Rose sauce, looked a bit like a car crash and was one of the best I have ever eaten while the Canarian cheese was slightly charred and served with a delicious mojo sauce. We chose a bottle of Faustino VII Rose and the dry crisp wine was a perfect match.

Porto Mar is located on the promenade in the New Town. As with most restaurants, a person is standing in front of the venue inviting you in – competition is high. Service was excellent with a waiter who had a great sense of humour. Again, we chose several dishes – my garlic prawns were fantastic but not all were de-veined (that is a re-occurring thing in all restaurants) in sizzling garlic oil. The garlic and cheese bread was a bit of a disappointing and nachos with guacamole looked like it was plated about a day ago and was a not enticing at all. Mr T went for Canarian potatoes, salt baked and served with mojo sauce and fried sardines. Both were big portions but well cooked and tasty.

Street Food – we visited this place on the first night when we just arrived. Mainly because we were starving and it was the only place that was still open at that time. We couldn’t have chosen better (we returned twice) – the nachos came with guacamole that was out of this world. Mr T ordered Bao Buns with slow-cooked lamb – flavoursome, succulent and delicious. We should have ordered two portions as it went down just too easy. The local Tropical beer went nicely with it and we knew we had finally started our holiday. Funny thing: they re-named the place while we were there and it’s now called Steak Burger. This is the little (and more casual) sister of La Cascada next door (also worth a visit). On our second visit, we had a pizza and chips (the Street Food way) – both were also delicious. Prices won’t break the bank.

Taberna de Nino – here I had the best and not so good meal. Mr T was out cycling one day and I was on the lookout for a lovely lunch. I liked the look of Taberna de Nino and they had a lovely terrace so the decision was easy. I didn’t want to stuff my face with a full-blown menu so opted for the tapas menu – vegans would have been very happy as they had a few interesting options available. But the tempura langoustines were smiling at me. The menu read that they were served with an orange tartar sauce. Now, I was intrigued by how an orange flavoured tartar sauce might taste – I still have no idea as the orange the menu referred to was the colour and not the fruit. Apart from that, it was one of the most delicious tartar sauces I had in a long time with a perfect balance. As stunning as the colour looked, I have no idea why they serve it that way. The langoustines were h texture with just the slightest batter caressing the little beauties. I also had half a portion of Padron peppers again – and they were simply perfect.

And because of that amazing experience (in my eyes the best I had so far in I bugged Mr T to return with me for a romantic evening. The problem with high expectations – there is so much room for disappointment. Mr T ordered stone bass served with grilled vegetables. Stone bass is a firm fish and it is easy to overcook – which the chef did in this case. I was enticed by the sole rolls with prawns and a lobster sauce. Now, I love a good lobster sauce, unfortunately, this wasn’t one. The sole and the prawns were slightly overcooked as well. The place wasn’t busy so there really wasn’t any excuse for this and I was utterly surprised by how different my two experiences were. Service was excellent and attentive – if I ever return to Lanzarote, I will pay them a visit again.

We had heard so much about the Sunday Market in Teguise – and since I love markets, the decision was made. We took the bus no. 12 only operates on Sundays for €1.70 (a taxi will set you back about €25-30). Teguise itself is a beautiful village with a lot of the original buildings and was the capital o the island before was declared capital in 1852. The market itself was very disappointing with mostly kitsch and touristy nicnacs. It is a large market and you will have to walk it all to find the small treasures. A small part is a food market with the largest potatoes I have ever seen, a baking stall with delicious and stalls with local jams and cheeses (both utterly delicious by the way). A few genuine artists can be found as well as a few ‘leftover surd dudes’ from the 80s who have missed the boat into 2019. Local lace is stunning and I wished I had had time to learn how to make it.

Our disappointment in the market was soothed by El Chiringuiti – a traditional tapas eatery, loud, lively and basic. Again, food was displayed at the bar and after a few funny explanations in a mix of English & we chose a goat stew, veggie pastries and fish croquettes. It came served with bread and apart from the fish croquettes which could have benefitted from being fried fresh. Service was brisk and we enjoyed the flavours of each dish. Goat’s stew was slow cooked with a depth of flavour that made you smile. The portion was generous and we left with happy smiles. The town itself is stunning, the market is a must if you like a buzzing atmosphere. Bars and eateries are open and invite you to rest your tired feet.

The island is small enough to get around in busses (you can also book taxis and coaches to a much higher price) and we took the bus to Arrecife – the capital of the island. It is also the only town that doesn’t make the main income from tourism. A small beach is accompanied by a promenade, lined with restaurants. As we skipped breakfast, Mr T was in urgent need of his morning coffee. Lolita is a bakery-cafe and we were encouraged by the long queue and we weren’t disappointed. The coffee was freshly made, strong and of high quality while the pastries were very tasty indeed. For lunch we chose Moet as our destination – when we did so, we just liked the look of it but the €10 for three courses made the choice even sweeter. I normally don’t go for cheap offerings as I am always worried about the quality of the ingredients. Mr T had a bowl of fish soup for starters – not the creamy version but bisque based with good fish and seafood. I tucked into some utterly tasty spinach croquettes that came served with a honey drizzle – unusual I thought but it worked so well. My main was black rice – flavoured and dyed with squid ink, it was perfectly seasoned with green chilli – while Mr T had a salad (I had more fun with my dish). Dessert was lovely vanilla ice cream.