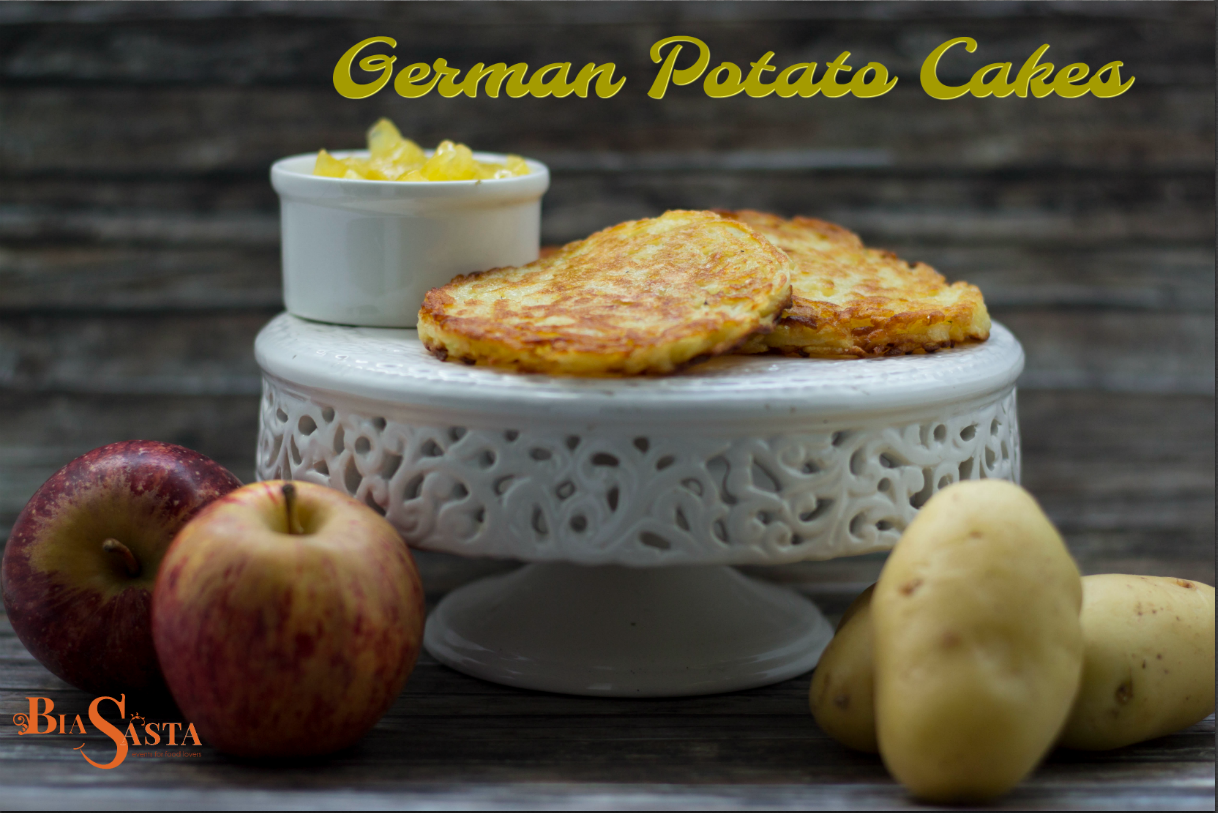 Continuing my journey with The German Files, today’s recipe is a very simple dish of potatoes. If you think only Irish people love potatoes, think again. The Germans can take a simple potato and turn it into something delicious. The German potato cakes are different from the Irish Boxty as only raw potatoes are used. Potato cakes are known under several names in Germany, depending on where in the country you are: Reibekuchen (from the German word meaning grating), Kartoffel Puffer (not sure where this name comes from as the cakes don’t really puff up) are the most common ones. Some people state that these pancakes are mostly served and sold during Christmas at the wonderful Christmas markets but I don’t remember that from my time in Germany.

What I do remember tho is my grandmother making them freshly and served them with her delicious homemade applesauce (Apfelmus). Yes, in Germany these little gems are served with an applesauce – trust me, it is yummylicious. My mum, being a busy mum of three with a fulltime job, used readymade ones, which you can buy frozen in any German supermarket. Applesauce is available in jars also in any supermarket.

When I tried making potato cakes recently for this post, I noticed that although I knew how to make them, I never actually did. I only ate them at my nan’s or mum’s – yes, I did eat the frozen ones at my mum’s as they were still tasty. But when I finished cooking and taking photos, I tucked in and the taste took me back many years to my nan’s kitchen when I was spooning way too much applesauce over the cakes and enjoyed my nan’s jokes and hugs. Happy times in my nan’s kitchen still make me smile today. I hope you enjoy this recipe. I didn’t make the German version of applesauce as I didn’t have enough apples to make it, so just cubed one apple and steamed it with sugar and used it as a compote – the result was still the same.

Note: Some people add a bit of baking powder but I couldn’t remember my nan ever using it so I left it out. 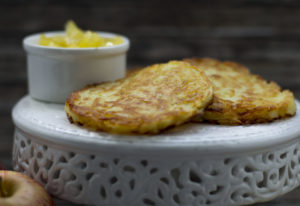 Using a clean tea towel, squeeze as much water out of the potatoes as possible (I remember my grandad ripping a tea towel once since then my nan did it herself). Pour into a bowl (a German chef I know is using the starch that collects at the bottom of the bowl – not the water – in his mix) and add the grated onion. Sprinkle over the flour and add the beaten eggs. Mix well. The mix doesn’t stand well so fry the cakes straight away.

Heat a bit of the sunflower oil in a frying pan and drop 2 tbsp (or more if you like bigger cakes) of the potato mix in. Press down slightly and fry on both sides until golden brown. Drain on paper towels and serve three cakes per person (or more if making smaller cakes) with a dish of applesauce (I might write a recipe for applesauce soon).